The Thames Valley Adventure Playground first opened its doors in 1982.  During that first summer holiday around half a dozen children visited each day.  In the course of the last 12 months over 15,000 visits were made by children and adults with all types of special need.

Sylvia Livsey, the first Chairman of the Association, tells how it all began:

“In 1971 a small group of us started a Toy Library for children with special needs in Cookham.  We began with very few members and toys in a trailer, special toys.  Later, we became permanently based at Highview, Mencap's home in Maidenhead, and we opened twice a week.  We joined the Toy Libraries Association and one day some of us went to their conference in Milton Keynes.  It was about play with handicapped children and one of the options was a seminar on Adventure Playgrounds.  I volunteered to attend this talk and was hooked! 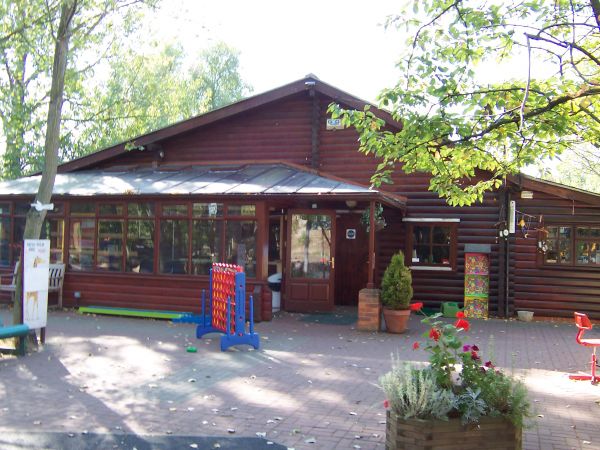 The whole concept of playgrounds for children with special needs is to provide the opportunity for play to those who, for various reasons are unable to enjoy the chance to play and have fun like other children.  It might be because of physical disabilities, the need for constant supervision and protection on an insecure public playground or just simply that they would be overwhelmed by more able children.  In a safe, secure environment, with specialized or purpose-built equipment, they would be free to play, explore and experiment, but, most of all, have fun.  The children would gain confidence, develop skills and make friends and their families would have the opportunity to meet, exchange experiences and support one another.

During half term and holidays we started taking groups of our Toy Library members to visit a playground in Aylesbury and later to four of the London Adventure Playgrounds.  We borrowed minibuses and some parents came with a car-load.  It was all a bit crazy, but we did have fun.  Without realising it, we were also doing quite a bit of useful research as it turned out.

We became affiliated to HAPA, who had started this movement, and eventually decided it would be infinitely better to have our own local playground.  Not only were we going to develop our own playground, but it was going to be better than those we knew:  we were going to go for excellence!

Following an inaugural meeting in 1978, a committee was formed, eventually becoming the Thames Valley Adventure Playground Association.  We chose this name as it would not be too specific geographically.  We spent 4 years planning and looking for a suitable site.  Several of these were rejected.  Committee member, Peter Prior, Chairman of the Summerleaze Gravel Company, who had been tirelessly helping to research the possibilities, suddenly remembered an area which was in an excellent position:  the site of an old gravel pit which belonged to Summerleaze, it covered over two acres adjacent to a layby next to the Bath Road in Taplow, and Summerleaze generously leased us the land for a peppercorn rent of £1 a year.  Accessible to the A4, M4, bus routes, and Taplow Station, the site overlooks a sailing lake and the trains and traffic roar by, sometimes inhibiting conversation, but a great attraction to many of the users.

It was a lengthy process, getting planning consent, of course.  It was in Green Belt, and the lay-by, which belonged to the council, was originally used to store road surfacing materials.  We decided on a Log Cabin for the building for several reasons.  Not only was it environmentally appealing, psychologically warm and welcoming (and not in the least institutional in appearance!), but it was also not wildly expensive.  It was to be built in two stages, to give us the chance to raise money over a longer period, and Summerleaze laid the total foundations in preparation for the second stage of building as well as negotiating roofing from Redlands and organising all the necessary services. The building was designed by a mature student doing a 3-dimensional design degree as one of her projects and incorporated a large, open play area, an office, kitchen, purpose-built toilets, with wheelchair shower and changing area and a staff loo.  We bought three basic manufactured pieces of outdoor play equipment:  a bed-swing (which even the most immobile children could enjoy), an ordinary large swing frame with a special swing seat and a wheelchair accessible roundabout.  These three pieces proved invaluable and have stood the test of time.

However, the concept of Adventure Playgrounds encourages purpose-built structures, always evolving and renewing, to generate new opportunities for exploration, experiment and excitement - hopefully, involving the children in the process.

A Rotaract group, with a structural engineer as its leader, built a sand and waterplay area accessible to wheelchairs - a core part of any Adventure Playground worth it's salt!  There is a water splash rather than a pool for safety reasons.  It's wonderful on a hot day to see the children rushing through, having water fights and being sprayed by the artificial trees.

Another early acquisition was a tennis-court size hard-surface area, initially thought of as a sports ground, but evolving into a wonderful space for wheeled vehicles, special bicycles, tricycles, battery cars, etc.  This was funded by the National Playing Fields Association through Mars.  We have had some notable successes when children have learned to ride bikes for the first time.  I remember when the mother of a 6-year-old who had Down's Syndrome was so delighted, not only with his cycling but also because he was dirty and had torn his trousers!  At home, he spent much of his time just rocking.  He is still with us on adult days.

Then came the second stage of the building.  With the Toy Library, we had also been to a conference on Soft Play.  It was very innovative at that time and it was our intention that the 2nd stage of the building would incorporate the biggest and best soft-play area we could manage, knowing that almost any child would benefit; even blind children could play safely, autistic children could have an uninhibited and wild time without hurting themselves and very immobile children could feel the vibrations, could be helped down the slide or sit in the ball pool.  The original Soft Play area was funded by 'Children In Need' and has continued to evolve, proving itself over and over again as the greatest asset.

Open To All Ages

We decided from the beginning to have no age limit at the Playground and are very glad that we took that decision.  Friday is an adult day and is usually oversubscribed.  Older people with a learning difficulty possibly have a very young mental age.  They may never have had the chance to play, paint, do woodwork, ride a bicycle and generally have fun - and they love it.  Very young children also come with their parents and it's often the parents who benefit, comparing notes, supporting one another and maybe sharing a very new anxiety they are coming to terms with.  Brothers and sisters are also welcome.  One evening a week we have Fun Club for over 16s.  Special schools come in term time and the Playworkers are able to work with the teachers to develop any special project they are currently doing at school.  In recent years the Playground has been working to provide respite care sessions, allowing parents an opportunity to have some time to themselves or to spend with their other children, happy in the knowledge that their child with special needs is not only receiving all the care it needs, but also have a fabulous time.

The Playground has grown! As well as 6 full-time members of staff, who are joined by sessional workers at weekends and during the school holidays, we employ a maintenance person and a gardener, who comes in one day a week.

Of course, we have had over the years many volunteers, not only working with the children and helping to maintain the site, but also playing a crucial part in keeping the Playground going through their service on fundraising and management committees, including Barbara Prior, who served as Chairman for over 17 years.  We have also been blessed with wonderful, dedicated staff, who are always very welcoming, caring and creative.  They are always coming up with new ideas and exciting new projects and are very aware of the needs of the children.  We now have two sensory rooms, a music room an aerial runway, a wheelchair swing, crazy golf and much more - often built by our staff.

For all the wonderful facilities and equipment we have acquired over the years it is the staff that remain our most vital and important resource.  It's much easier to raise money for visible and tangible assets rather than core running costs, and salaries for our staff make up ¾ of our annual running costs of approximately £350,000.

The Playground was opened by Terry Wogan in July 1982 for a Summer Playscheme, with one playleader, supported by volunteers.  It never closed.  It is now open 5 days a week, and, in 2022, we celebrate our 40th Birthday.

Without the support of the local community, we would not be here or, at least, not able to sustain the effort in keeping the Playground running, and we are lastingly grateful for all the help and generosity which has contributed to the Playground's success.”